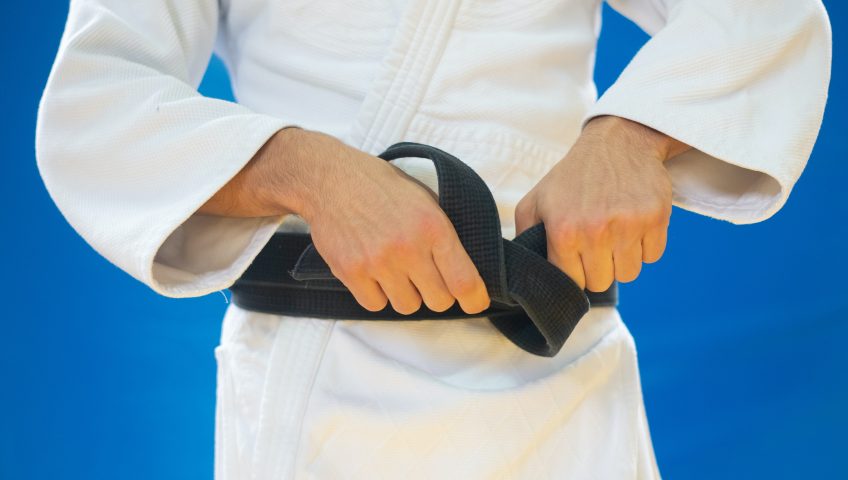 Invented in 1888, Judo is now among the most popular Asian martial arts in the world. Literally meaning “gentle way”, the name may sound harmless, but its results are often fierce and powerful.

In Judo, the knee tends to be one of the most injured areas due to the nature of this sport having constant physical contact, repeated falling, and quick changes of direction. In fact, up to 28% of injuries in Judo involve the knee1, and one of its most commonly injured structures is the Anterior Cruciate Ligament (ACL), which can cause significant time off training as well as a higher risk of future joint instability and osteoarthritis.

Mechanism of ACL Injury in Judo

A group of Japanese researchers investigated a total of 46 cases of ACL injury in college and high school judo teams2. Interestingly, they found that there is a higher risk of injuring the ACL if you and your opponent have different grip styles, specifically the kenka-yotsu style of holding due to the higher risk of being counterattacked when a throw is executed. The other finding, to no one’s surprise, is that the risk of ACL injury is higher when the legs are being attacked, especially with osoto-gari, kosoto-gari and harai-goshi. To understand why, we first need to look at the structure of ACL.

Understanding The Structure of ACL

The ACL is a unique band of dense connective tissue that runs between the 2 bones (femur and tibia) in the knee joint. Because of the orientation of the fibres, the ACL is commonly injured when there is a rotational force applied to a lightly bent knee while bearing weight on it.

The 3 most high risk throws Osoto-Gari, Kosoto-Gari, and Hirai-Goshi share similar technical characteristics; the opponent is being pulled sideways, placing their entire bodyweight on the leg being attacked, while rotational force is being applied on it. This can overstretch the ACL and in severe cases, tear it apart.

How Can We Lower The Risk of ACL Injury?

We can reduce the risk of ACL injury in Judo through:

The first step in injury prevention is to be aware of the risk of injury. A judoka should be able to recognise a high risk situation and understand how to respond to it, and ideally how to avoid it in the first place. The best time to do this is when they first learn the technique of the throw: other than showing the technical details of executing a throw, a coach should also explain the common errors that increase risk of injury, and how to avoid them.

The second step is making sure the judokas have enough experience encountering these high-risk situations. Frequent exposure in training allows a judoka to learn how to respond appropriately when being attacked by high-risk throws, thus understanding how to place themselves in less risky situations. It is important that a judoka goes through this repeatedly so that muscle memory is formed for this specific movement, allowing the body to react in a split-second manner.

Neuromuscular training is a specific type of training that aims to improve muscle firing patterns, dynamic joint stability, and movement specific to the sport. It has long been an important component in injury prevention programs and may include balance exercises, joint stability activities, resistance training, and sports-specific movement.

Let’s look at some neuromuscular exercises below designed specifically to reduce risk of ACL injury based on the mechanism described above.

The goal of the single leg exercise above is to load the various muscles on the kinetic chain so that they can adapt to the stress involved during high-risk throw. The exercise may be progressed by using weights or performing it on a foam block to further challenge the muscles.

A successful injury prevention program requires strong support from the coach, as well as willingness to learn and participate from the judoka. Consistency is key because prevention cannot be effective if the training volume is too low. It is recommended for coaches to highlight the risk of ACL injury and how to avoid it when teaching high risk throws. To increase the opportunity of practicing osoto-gari, kosoto-gari and harai-goshi, it can be included as part of daily warm up or uchikomi (repeated practice of throwing motion). As for neuromuscular training, it should form part of the strength and conditioning session for a judoka, whether in class or on their own.

Anson has 9 years of experience in physiotherapy, and specialises in musculoskeletal and sports injury rehabilitation. His main areas of focus include the shoulders, knees, and ankles. He is also a Certified Mulligan Practitioner.